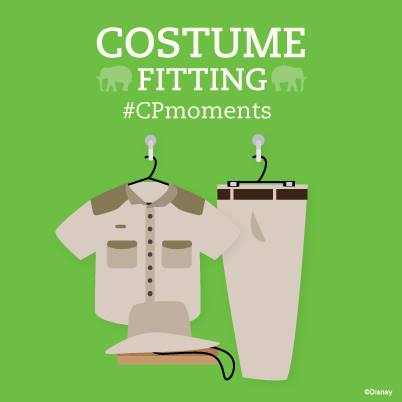 One of the most exciting CP moments is going to Disney costuming for the first time and being fitted for your work costume. You’re allowed to check out up to five complete work costumes at a time, plus accessories like a jacket and hat, if your costume has one.

When your costume gets dirty or wrinkled, you can just trade it in for a clean one. Costumes can also be machine washed and, now that we have a washer/dryer unit in our apartment, we don’t go to costuming as often.

Each of the Parks has its own costuming warehouse open 7 days a week, with the one for the Magic Kingdom being the largest.

Here are some of the various costumes that we’ve worn during our DCP time:

There’s something about the look of these costumes that vaguely looks like a combination of the Spaceship Earth cast member costumes at Epcot and the Tomorrowland costumes at the Magic Kingdom!

There are three groups residing in Pandora: Alpha Centauri Expeditions, Scientists from the Pandora Conservation Initiative, and EXPAT Community.

Each of these groups have specific roles in Pandora and have special costumes that reinforce those roles for guests.

We’ve included advice on how to successfully get into the DCP program, including some of the actual phone interview questions, how to have a successful internship, and how not self-term before your program ends. Our book is filled with lots of behind-the-scene stories of the magic of Disney. Available now at Amazon.com in paperback and Kindle formats. Published by Theme Park Press.