One of the best kept secrets hiding in plain sight at WDW are the pressed coin machines. There are well over 200 pressed coin machines at WDW and they are everywhere: in all the Parks, at Downtown Disney, at all the resorts, at the two water parks, and at the Disney Cruise Line ports.

On our very first trip to WDW in 1993, we started collecting pressed pennies of our favorite rides and attractions. Disney sells a pressed coin collection vinyl booklet to display your pennies in. It’s a steal at $6.95.

Here is a link to a .pdf of the WDW Coin Press Map: http://www.parkpennies.com/disney-pennies-wdw/wdw-penny-press-machine-maps.pdf

We think that the pressed pennies are one of the best souvenirs that kids can get at WDW. They are a real bargain at just 51 cents, costing just one shiny penny to press and 50 cents, two quarters, for the machine. If you are feeling rich, at some machines you can press a dime or a quarter. Some machines are electric presses, but we like the coin machines that you have to hand crank to press the penny.

One afternoon while Elly was working at DTD, a family came into Once Upon a Toy. The dad had a copy of the WDW Coin Press Map and four baggies of coins. One baggie was full of shiny pennies, one was full of quarters, and two baggies had each of his children’s names written on them. While the mom shopped, the dad and his kids found the coin press machine for the “Cars” series and the kids each selected the one they wanted. The machines all have at least three press designs and some have four choices.

For example, say you would like to collect all the pressed coins for the Disney movie “Cars”. Disney doesn’t make it easy. You really do need a map to find them all. Here are all the locations that you would need to visit to collect all nine coins in the “Cars” series:

The dad told Elly how much his kids were enjoying searching out the coin machines everywhere that they went. When they had downtime at a restaurant while waiting for their food to arrive, he would give them their baggies of pressed coins to admire and play with. The coins are also great for pool diving games. The copper sparkles like pirate’s treasure under the pool water. 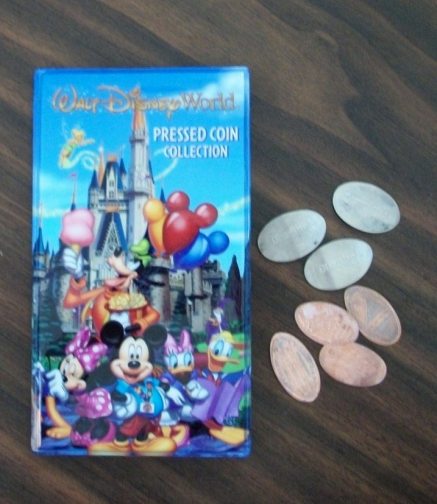 One reply to “Pressed Pennies at Disney World”