The Disney villains only come out during Mickey’s Not So Scary Halloween Party.

Special Character line-up for the 2018 Mickey’s Not So Scary Halloween Party: 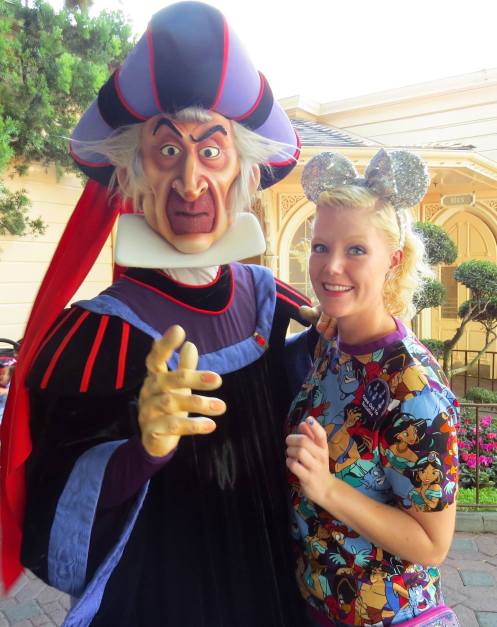 The Headless Horseman leads the Boo to You Parade….which is loaded with Disney characters dressed in special Halloween outfits if you don’t have time for the character meet & greets. 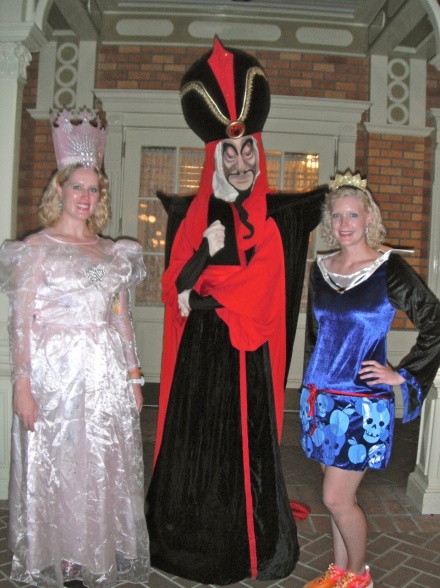 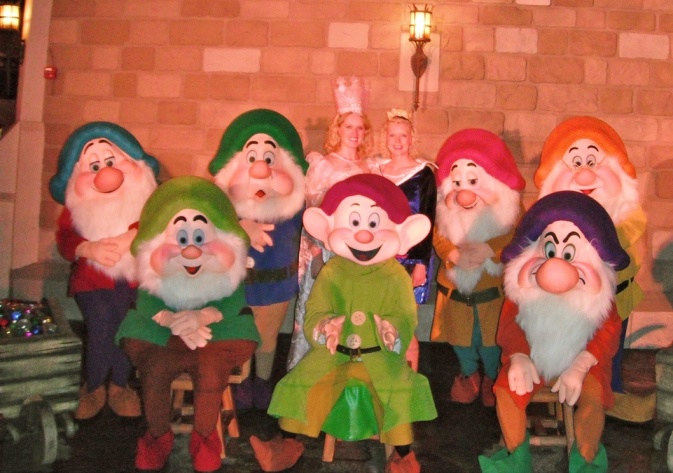 We got to meet all 7 dwarfs during the MNSSHP party!

The good guys and Disney heroes are also at the MNSSHP party.  Meeting Captain America.

Thor.  Expect to see a lot of the Marvel Heroes.

The MNSSHP hard ticket, after-hours event is expanding to 34 evenings this year, spanning over three months!

Tickets for this Halloween spectacular start at $75 for advance purchase, or $85 at the gate, if available.

MNSSHP nights at a glance. 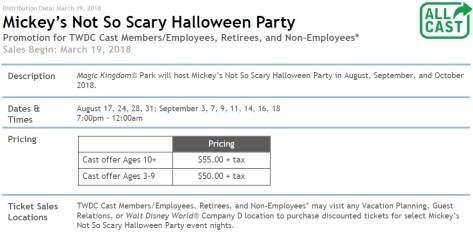 Don’t forget to buy the 2018 Magic Band and some 2018 MNSSHP pins! They are only for sale during the party nights from 7pm-Midnight.

We love this year’s Sorcerer’s trading card of Orange Bird!

Star Wars: At last year’s MNSSHP party with our significant others. 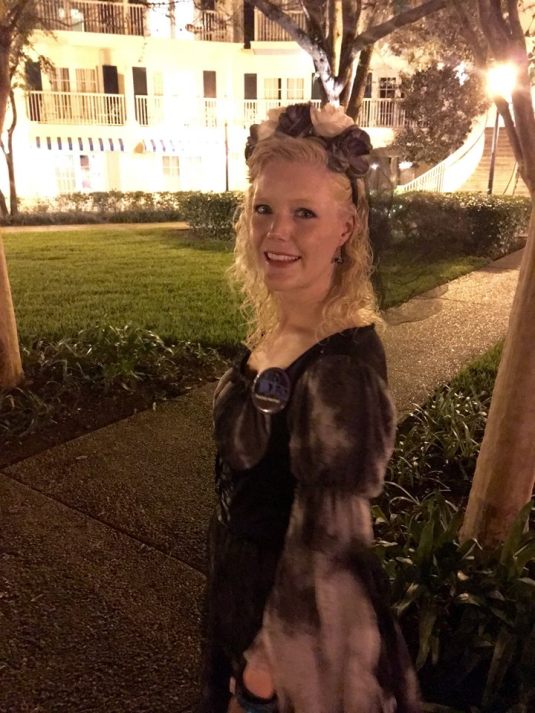 Caroline going as your Ghost Host from the Haunted Mansion. 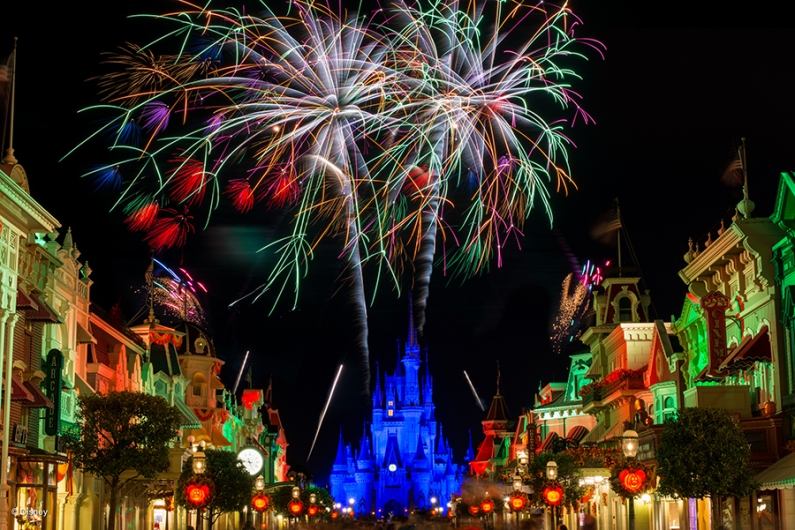 Main Street USA is all decorated for fall. So pretty!

The Magic Kingdom was fully decorated for Fall/Halloween on Wednesday, August 15th this year.  Two weeks earlier than last year. 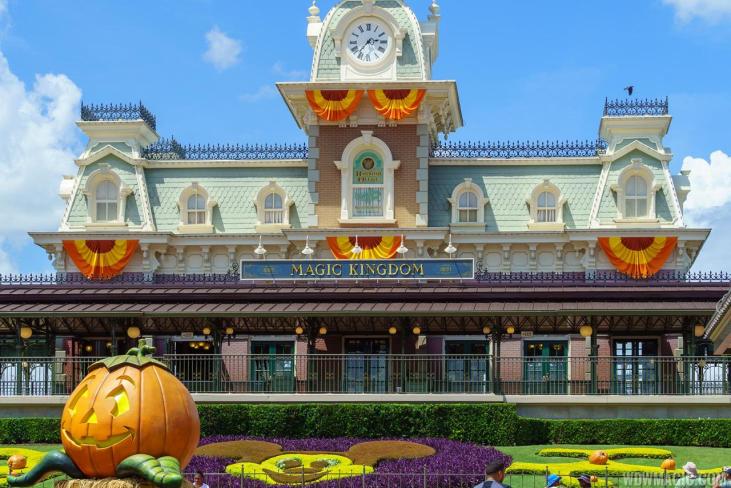 CP Tip:  The party starts at 7pm, but Disney let’s guests wearing costumes in for the party starting at 4pm. (Normally, adult guests may not wear costumes in the parks.)  Come early and plan on staying until midnight!

Plan on being at MK all day:  Plan on going to the Magic Kingdom in the morning and storing your costume in the lockers near the entrance.  At 4pm, change into your costume and have your photo taken on Main Street before the crowds arrive at 7pm!

If you have time:  Go visit the Headless Horseman at Fort Wilderness in 2018  earlier in the evening. 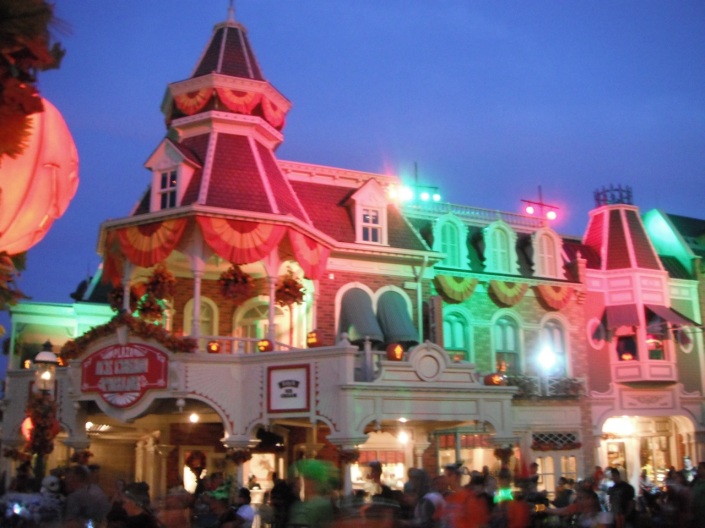 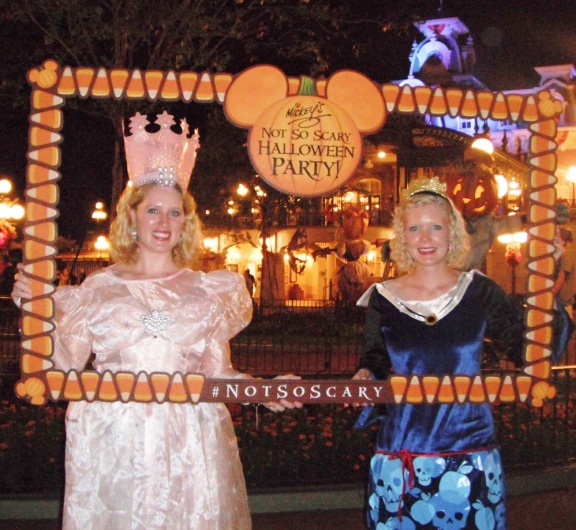 Having ‘after dark’ fun in our costumes!  PhotoPass on Main Street.

Have a magical time!

Watch out for the headless horseman who leads the Boo To You Parade each evening!! 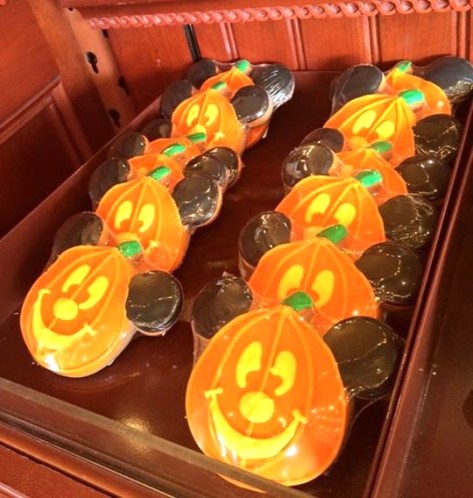 Special Treats are available during the Halloween season!

You don’t need to bring your own trick-or-treating bag as they hand them out for free…but you can if you want to!

Free candy! Take as much as you would like!!! 🙂 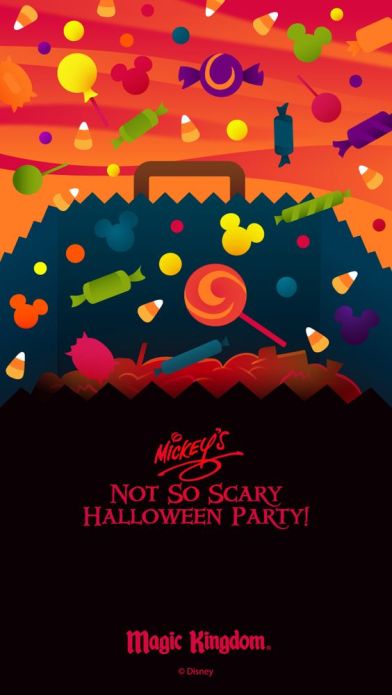 Lions and Tigers and Strollers, Oh My!

This is not Caroline’s first time in the Disney College Program. Along with her sister, she was previously accepted into the program a few years earlier.  Back in Colorado, Caroline was wishing for a little more pixie dust to brighten up her life.  On a whim, she decides to apply to the exclusive Disney Alumni Summer Program.

Now that she’s back, things get wild.

Wild, as in Disney’s Animal Kingdom, where Caroline is assigned to work in Stroller Rental.  While not the most glamorous position in the park, it’s often ground zero for humanity at its best and at its worst.

While Caroline makes many “Magical Moments” for deserving guests whose pixie dust has gone temporarily sideways, she also receives magical moments of her own through the friendships she makes, going to Disney cast member exclusive events, and all the spectacular dining opportunities at Disney World.

Caroline tells all – from the ins and outs of Disney’s secret training class called Traditions; to learning how to be a happy cast member during on-the-job training; to what it’s like to interact with fellow cast members and the guests who are ready to explore the most magical place on earth.

Join Caroline as she takes you on a wild ride through her adventures in Disney’s Animal Kingdom. But be careful, it’s a jungle out there!

Book link on Amazon.com:  Adventures in the Animal Kingdom 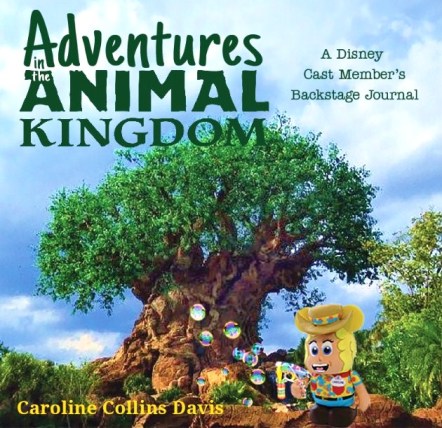 Meeting the Genie in Adventureland.

Robin Williams passed away this week and we thought we would do our Throwback Thursday featuring The Genie from Aladdin. 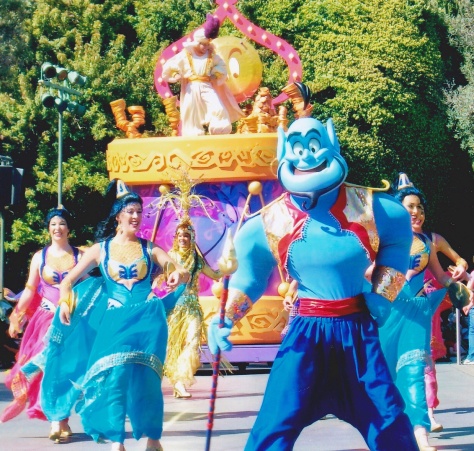 Genie in the afternoon parade.

The Genie is considered a “rare” Disney character because, while he sometimes appears in parades, he almost never is available at a Meet & Greet, except during special occasions.

We were lucky to see The Genie during Mickey’s Not So Scary Halloween Party in October 2013.

The following statement is from Robert A. Iger, chairman and chief executive officer, The Walt Disney Company:

We’re deeply saddened by the loss of Robin Williams, a wonderfully gifted man who touched our hearts and never failed to make us laugh. An incredible actor and a comedic genius, Robin will always be remembered for bringing some of the world’s favorite characters to life, from his zany alien on ABC’s Mork & Mindy to the irascible genie in Disney’s Aladdin. He was a true Disney Legend, a beloved member of our family, and he will be sorely missed. We join Robin’s friends and fans everywhere in mourning, and offer our thoughts and condolences to his family during this difficult time. 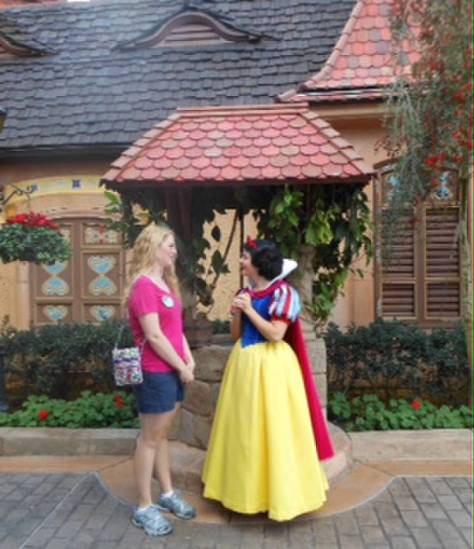 A hot, hot summer day and not a droplet of sweat on Snow White!

We think that the CMs in character roles – both face and fur – have some of the toughest jobs at Disney.

Whenever we watch the 3pm parade in the broiling sun, when it’s 95 degrees with 90% humidity out and we see all those princesses wearing their heavy 10 lb. + velvet costumes, seeing them smiling and waving to the crowds and looking as cool as a cucumber…it’s just amazing!  They are weather champions!

And, then there are the guests:
(from cracked)
In general, there seems to be a weird desire by guests to “debunk” the idea of Disney characters, like they’re blowing the lid off of some scam.

The official position of the Walt Disney Company is that all characters are real and there is only one of each of them, and the whole Park is organized so that no one will ever see two of a character at once — Mickey is never dining in a restaurant at a character breakfast and walking by in a parade at the same time.

We always have to be ready with an explanation of their schedules, because adults try to trip you up, saying they just saw a character across the MK Park, and now here they are over here as well. You have to try to keep a straight face while pointing out that, “Well, you had time to walk over here, so Mickey did too!”

I think just seeing someone in costume messes with people’s brains. Visitors would whisper insane stuff to me, like “So glad we got to see you, the kids don’t know we’re getting divorced after this trip” or “We haven’t told the kids yet that their mom has cancer.” Why the heck would you tell Mickey that…or a MK Park CM dressed as Mickey? [Most of us are in our early 20s and are not psych majors at college!] 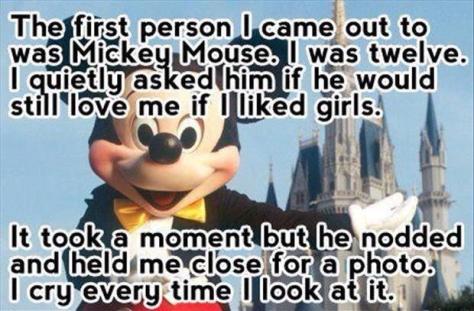 Speaking of Mickey, every single terminally ill Make-a-Wish kid gets to meet him, and that’s hard. Because of how many sick kids visit the Park every week, it can be a painfully regular thing to see.

But, the Fairy Godmother has it hardest: Kids ask her to cure them of their [often fatal] disease. If I made it to the second set without sobbing, it was usually a good day. 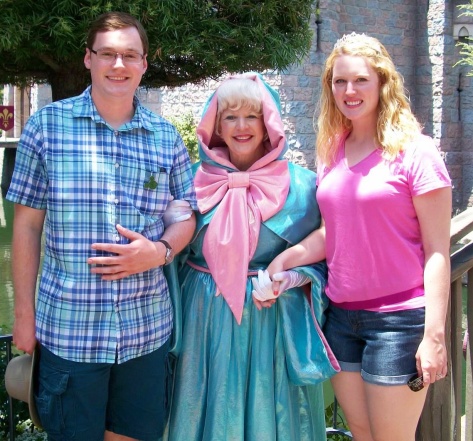 We think that the Fairy Godmother is the oldest face character. Most princesses are in their early 20s, but she always seems > 60 years old.

To read more about working at Disney: http://www.cracked.com/article_21011_6-things-nobody-tells-you-about-working-at-disney-world.html#ixzz35hkWwSG6

All year, we have been collecting photos of Mickey in his different costumes and this cruise was like JACKPOT!

When we got to the Disney terminal to check-in, Minnie was already there greeting guests wearing her cruise director costume. Captain Mickey arrived about 20 minutes later for his meet & greet.

Olaf from ‘Frozen’ was doing a hula dance by the gangplank.

Because of the way we booked our cruise within two weeks of sailing, we were automatically assigned the late seating time for dining. The first thing we did onboard was change our dining reservation time from late seating (8:15pm) to early seating (5:45pm). Because our ship was sailing with >10% vacancy, this was not a problem for us, but I don’t think that’s true normally.

Once onboard the Dream, the character greeting times are listed on an LED screen by the Grand Atrium and also in your daily Personal Navigator newsletter that is delivered to the cabin nightly. 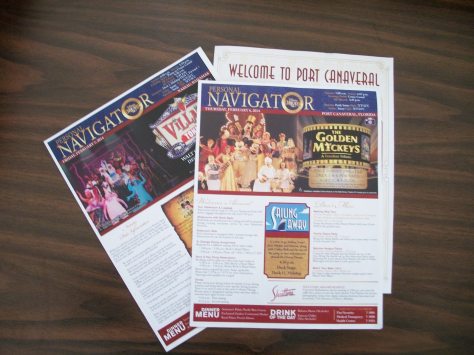 Copies of the Personal Navigator newsletter with all the things to do onboard and ashore.

Guests actually bring yellow highlighters onboard with them and read the Personal Navigator newsletter cover–to-cover highlighting all the things they want to do so they don’t miss out on anything. First run Disney movies play from 8am to midnight in the Buena Vista Theatre; we watched “Frozen” in 3D one night. And, every night there is a new Broadway show performed in the Walt Disney Theater. We loved it all!

Dining onboard the Dream was wonderful. Disney does rotational dining where you get to dine in a different restaurant every night. Your servers move with you from restaurant to restaurant, showing up in a different costume each night. The first night, we ate at the Enchanted Garden, the restaurant theme was inspired by the gardens of Versailles. It was beautiful. The food was “‘Continental Market”.

The second night of the cruise we ate at the Royal Palace, the more formal of the three restaurants. The food was “French Dinner”. (I had Chateaubriand Beef, fork tender!) 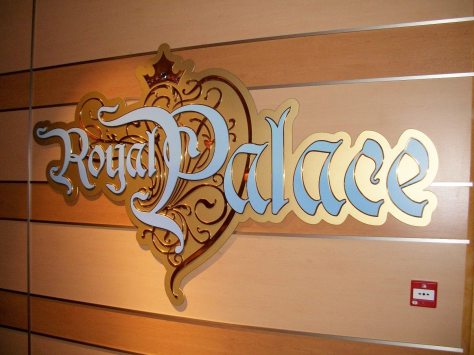 Outside the Royal Palace.

On third night, we ate at Animator’s Palate, a really cool restaurant with a lot of animation going on in the large LED screens along the walls of the restaurant. Fishes, turtles, sharks, etc. start out swimming in one LED panel, then slowly swim around the entire restaurant. The food was “Pacific Rim Cuisine”. This was the night the dining crew celebrated Caroline’s birthday by bringing her a special dessert and singing “Happy Birthday”. 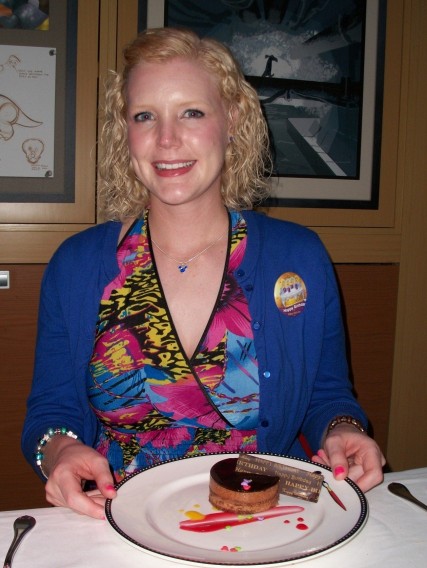 Caroline with her special birthday dessert.

All the food served for dinner during each the four course meals was delicious from the appetizers, to soups/salads, to main entrees, to the dessert selections…all of it was top notch. We tried to order at least one seafood dish, either the appetizer or entrée, at each meal. 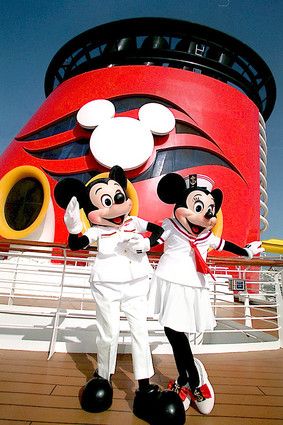 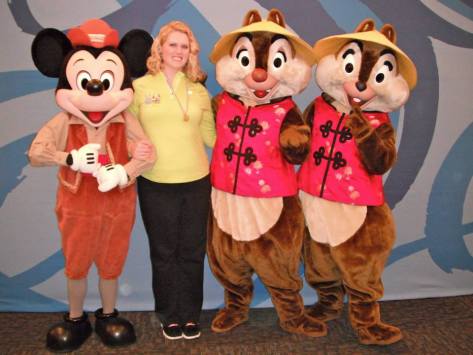 This month’s housing event was a celebration of the upcoming Olympic Games, which open in Sochi, Russia on Friday. There were Disney characters present from around the world.

I’ve been trying to see how many photos of Mickey in different costumes I can get. He has over 290 different costumes that he can show up in for pretty much any event or theme you can think of. (Minnie has over 200 costumes in her wardrobe.) This is the first time that I’ve seen Italian Mickey and New York Minnie. 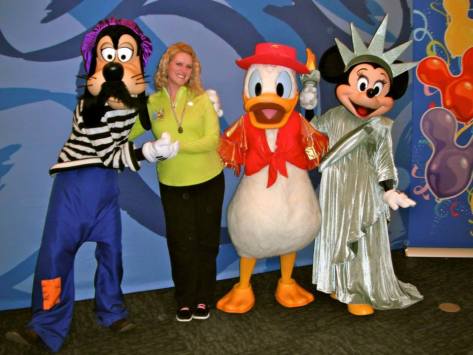 Goofy is from France, Donald from Mexico, Minnie from USA.